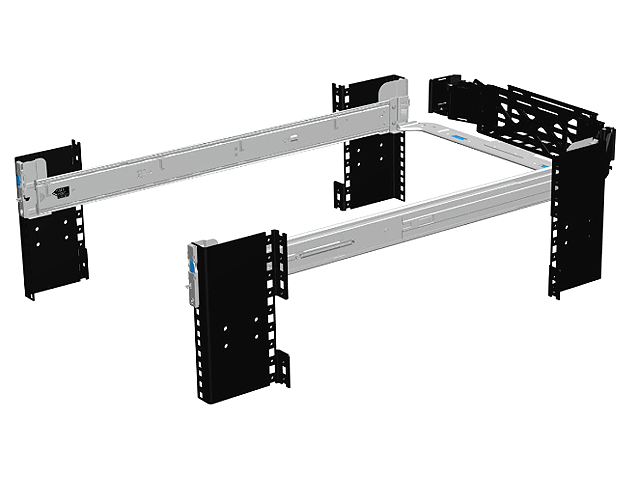 The sliding and static rail systems for the Dell PowerEdge R520 provide tool-less support for four-post racks with square or unthreaded round mounting holes. Both rail systems also support tooled mounting in four-post threaded racks and the static rails support tooled mounting in two-post (Telco) racks as well for added versatility. Compared to the R510 sliding rails that required the use of adapter brackets, the sliding rails for the R520 now offer support for threaded hole racks with the ReadyRails II mounting interface.

The optional cable management arm (CMA) can be mounted on either the left or right side of the sliding rails without the use of tools for fast and easy deployment.

The R520 is backward compatible with the R510 rails and CMA.

The R520 supports both sliding rails and static rails. Both rails have a new slim rail design that supports the wide system chassis.

The rails ship in the tool-less mounting configuration, but can be converted to the tooled configuration very quickly and easily.

Sliding rails include a self-adjusting feature to allow the rails to be shared across multiple systems and accommodate various chassis depths. The sliding rail system allows the user to fully extend the server out the rack for easy access for service. The sliding rails are available with or without the optional CMA. The static rails support a wider variety of racks than the sliding rails but do not support serviceability in the rack and are therefore are not compatible with the CMA.

One key factor in selecting the proper rails is identifying the type of rack in which they will be installed.

Screws are not included in either kit due to the fact that threaded racks are offered with a variety of thread designations.

The user must provide screws when mounting the rails in threaded racks. Screw head diameter for the sliding rails must be 10mm or less.

Other key factors governing proper rail selection include the spacing between the front and rear mounting flanges of the rack, the type and location of any equipment mounted in the back of the rack, such as PDUs, and the overall depth of the rack. Due to their reduced complexity and lack of need for CMA support, the static rails offer a greater adjustability range and a smaller overall mounting footprint than the sliding rails.